Suddenly standing in the back of a pack-up on a grew Sunday afternoon somewhere in a Sofia suburb. Well standing? Because of ten fanatics jumping up and down, is was more dancing. For sure it does need an extra MOT later on because of broken springs. Nothing stopped these guys from supporting their team today.

We knew on forehand the match would be played without fans. The home team was punished after a pitch invasion and attack on the referee. Four matches without fans. Welcome in Bulgaria!

We took a gamble. The group of 12 on tour (In de Hekken Travel) were in for some adventure. Maybe we would meet an hospitable Bulgarian person who would let some football tourists into the stadium to watch the match. If not, at least we visited the obscure Lokomotiv stadium. Unfortunately for us, the last option. The whole stadium was closed and at the main stand nobody spoke English. In stead of hospitality, they were surprised about a bunch of Dutchies wandering around their stadium. 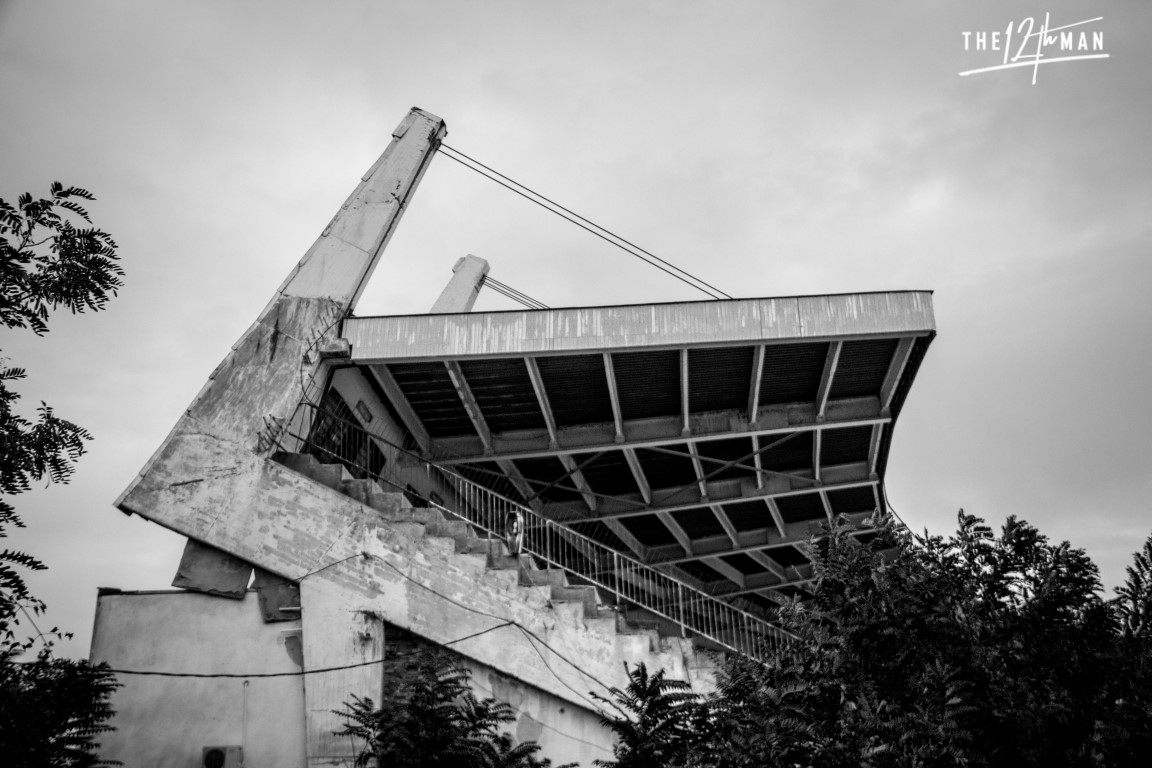 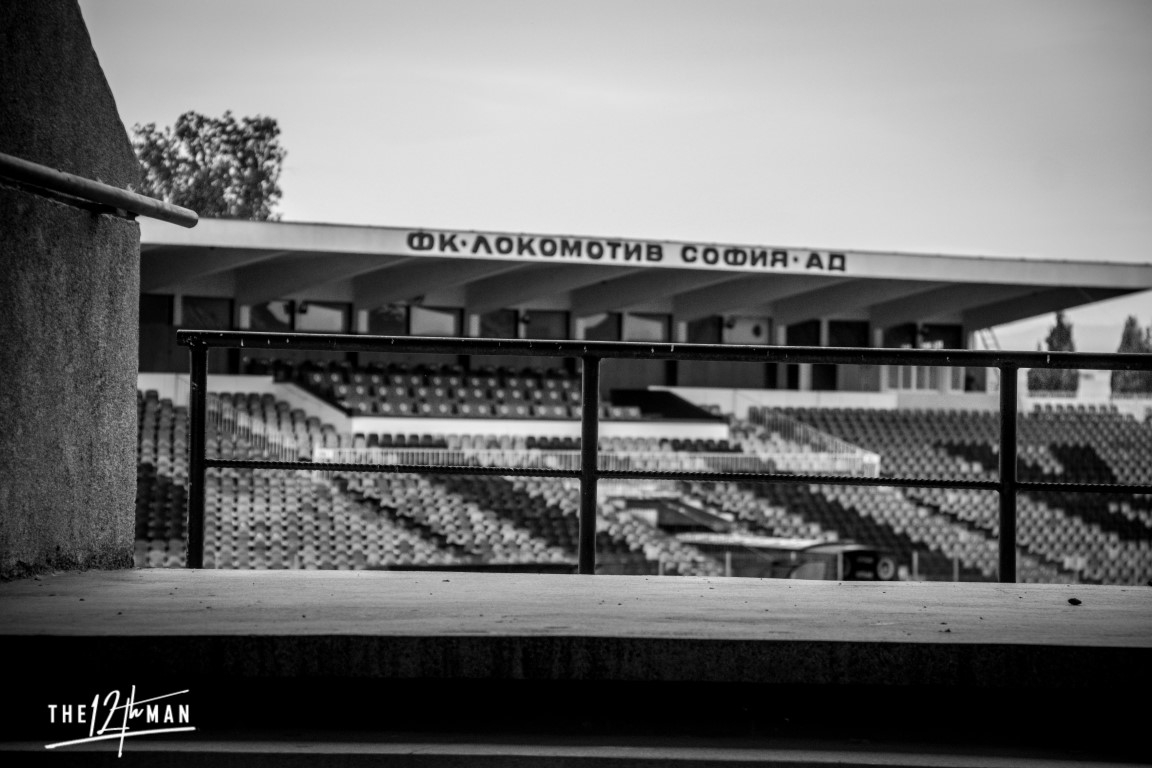 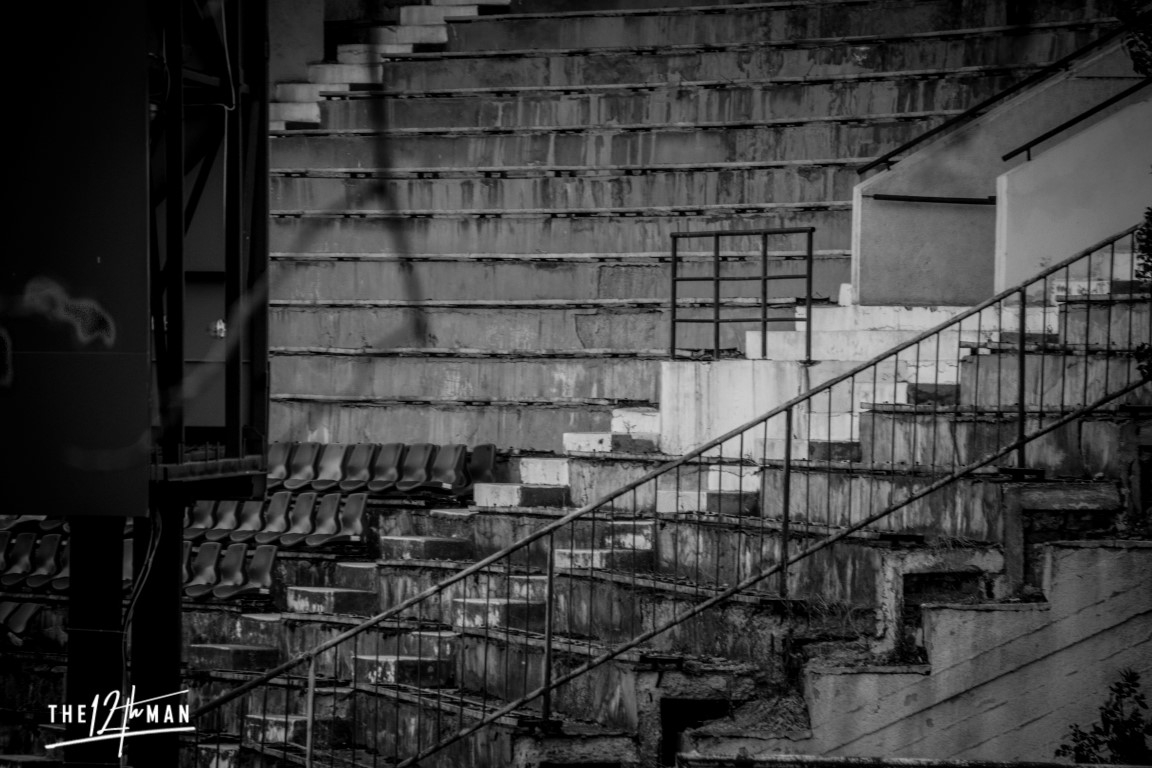 The club was founded in 1929 as ZSK Sofia. Multiple name changes followed and they had a two year flirt with Slavia Sofia. They always played in the shadows of the big two Levski and CSKA, but managed to win the league and cup both four times. The last price was won in 1995.

Slowly the club decayed which resulted in being put back to the third division after financial problems, despite their third place in the league. Shortly after they went bankrupt. With help from their fans the club was ressurected. They started in fourth division, but in 2016 they were added to Vtora Liga, the second division. They play an anonymous role in this league, with even a change of relegation.

The average Bulgarian person is nationalistic, proud people. More often this changes into extreme proportions and it is no public secrecy. At The Eternal Derby in March 2017 I already saw some World War II signs within Levski ultras. They are definitely not the only one. At Lokomotiv they are bit more extreme. I wonder if they actually know the history or is just a form of being naive?

When walking around the stadium we saw multiple Swastica’s. The sinister looking stand immediately got a bit more darker character. They also don’t like the police looking at a bunch of 1312 and ACAB signings. I would be more suprised if I wouldn’t see any, as it is more a standard than an exception in football.

We decide to have a drinking in the local clubhouse, which turned out to be open. A small wooden cabine which was filled with club posters and other stuff. An older lady and man are running the show. The last one proud member of the Drinking Hools. Being a bit stand-offish at first, he rapidly changes into a very hospitable man. He proudly shows their banner together with an other oldtimer. The start of an amazing match day!

Buying some beer and wodka for ten people wouldn’t cost you more than 9 Euro. You understand why we liked this clubhouse so much. Slowly the place was filled with more Loko fanatics, some member of their current ultras group. Despite the ban and a big closed fence around the pitch at those places where you can’t find a stand, they were determined to support their team that day.

Two pick-ups came down to the stadium and together with a small shack plus some other material they quickly set-up their alternative stand. With a lot of booze we were invited to watch the match together with them. A very homey atmosphere, despite the stickers we got from them saying “Groundhoppers not welcome”. It is Bulgarian relegayion football at their best.

Loko is almost at the bottom of the table. Todays’opponent Kariana can be found one place lowe at second-last. A true six pointer. The football itself, as I am used to at the Balkans, is aweful to watch. But the fanatism of the oldtimers and ultras is just magnificent. 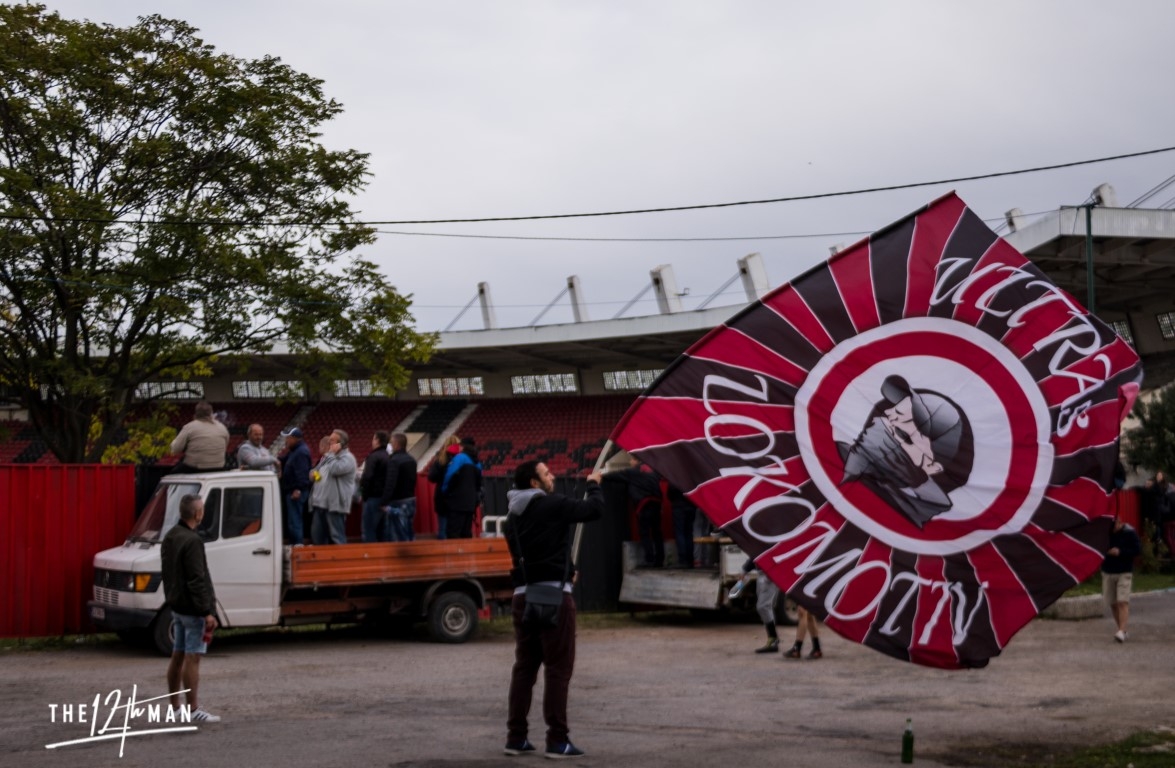 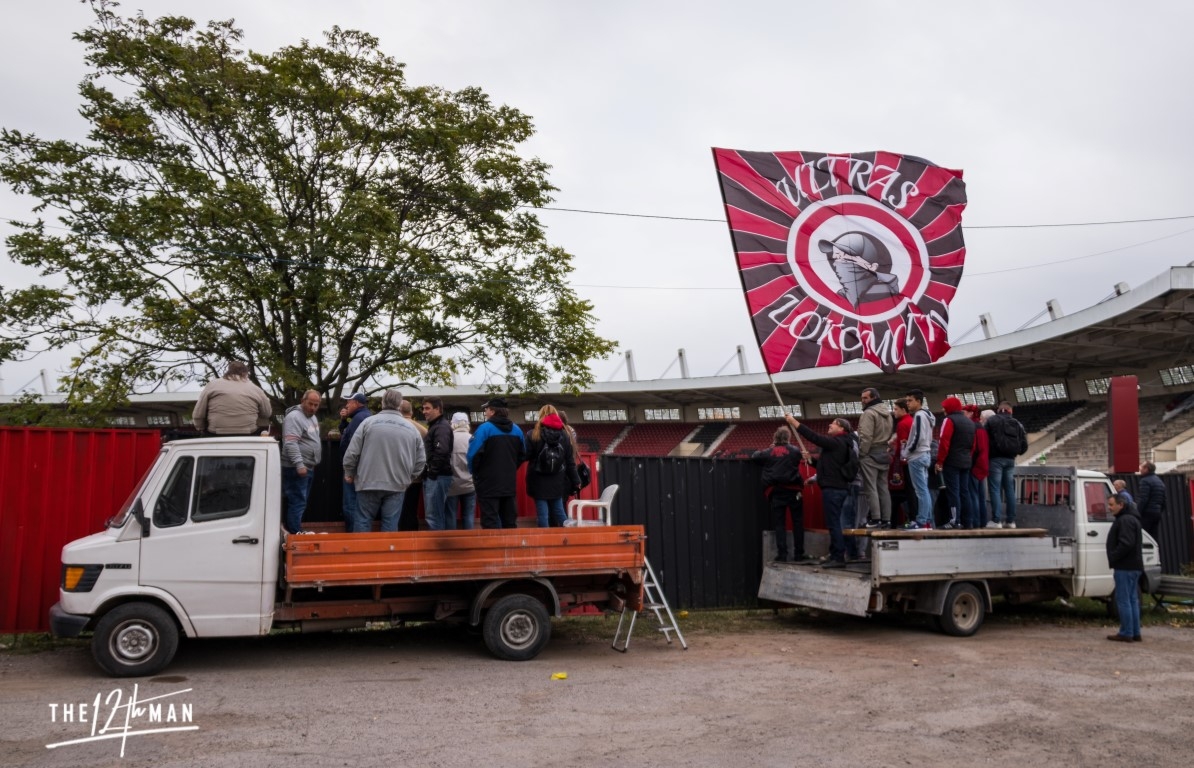 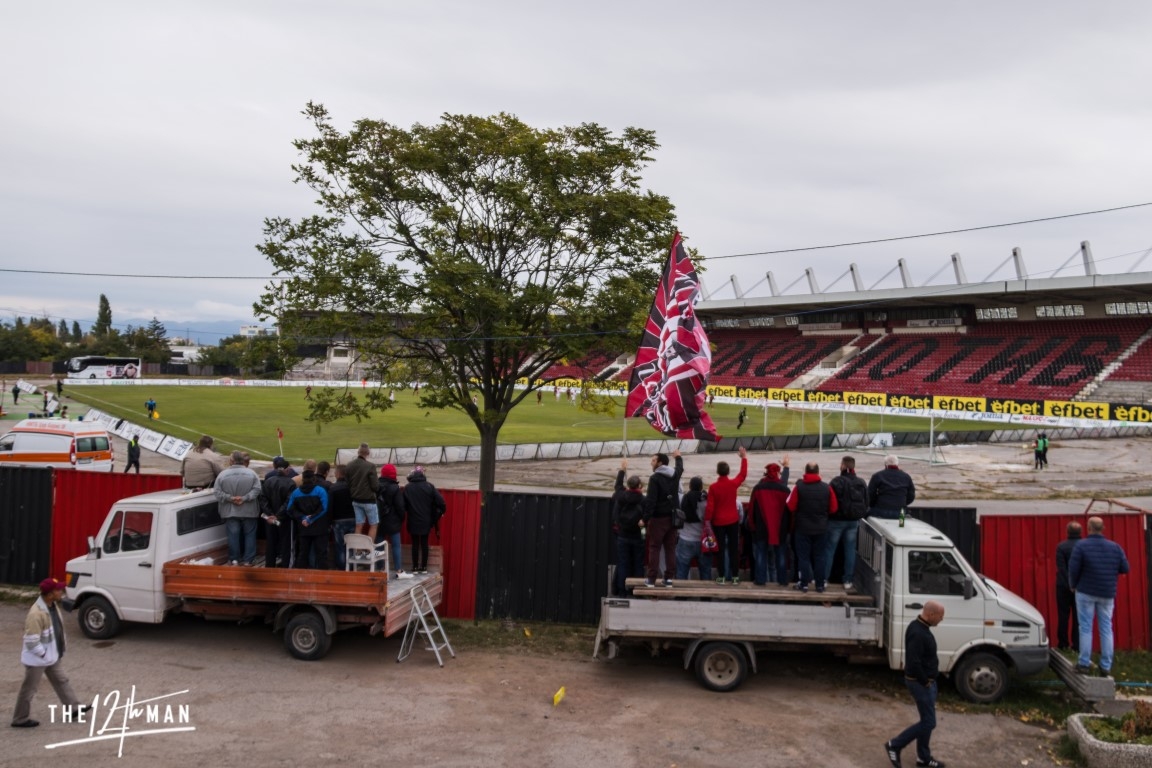 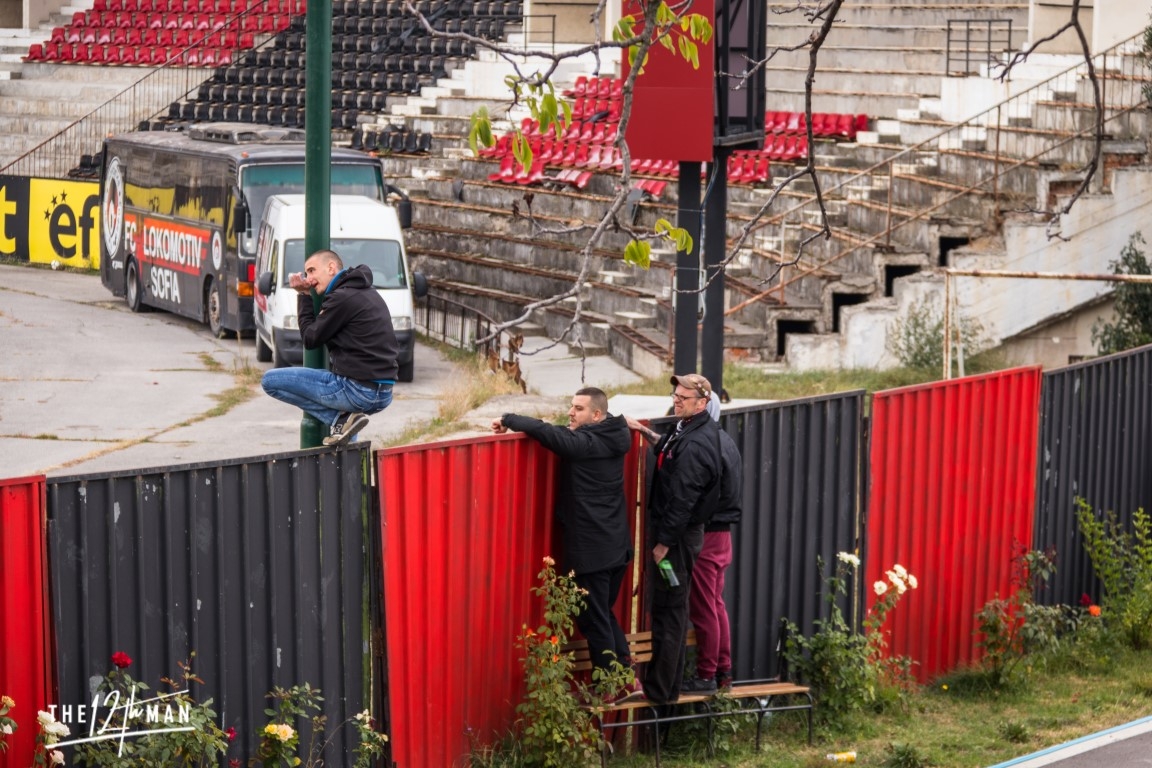 The home team simply won the match 2-0. The opposites weren’t able to even cross the middle of the pitch. The “Three Side” (because of the three right in front of us within the stadium walls) was thanked for their presence. Time for a party, so back to the shack.

In the mean time they gave us more stickers. We were also allowed, by exception, to enter their ultras fanshop. It turned out to be not more than another small dusty shack. They promised us awesome merchandise. The extreme thinking showed itself. Dubious, extreme right-wing t-shirts were shown which we obviously kindly thanked for. For the general ultras stuff, they were so kind to drive up and down to some place to get it for us. And those were very nice actually.

It turned out be an amazing day with a very small black page attached. Their hospitality and way of supporting their team in this unique way were just fantastic. We will never have a match day like this. But their relation to racism and the question if we would also be so welcome if everyone was arround, gives thoughts. But we wanted adventure and we certainly got that! A day for in the books, which we will talk about for many years to come. 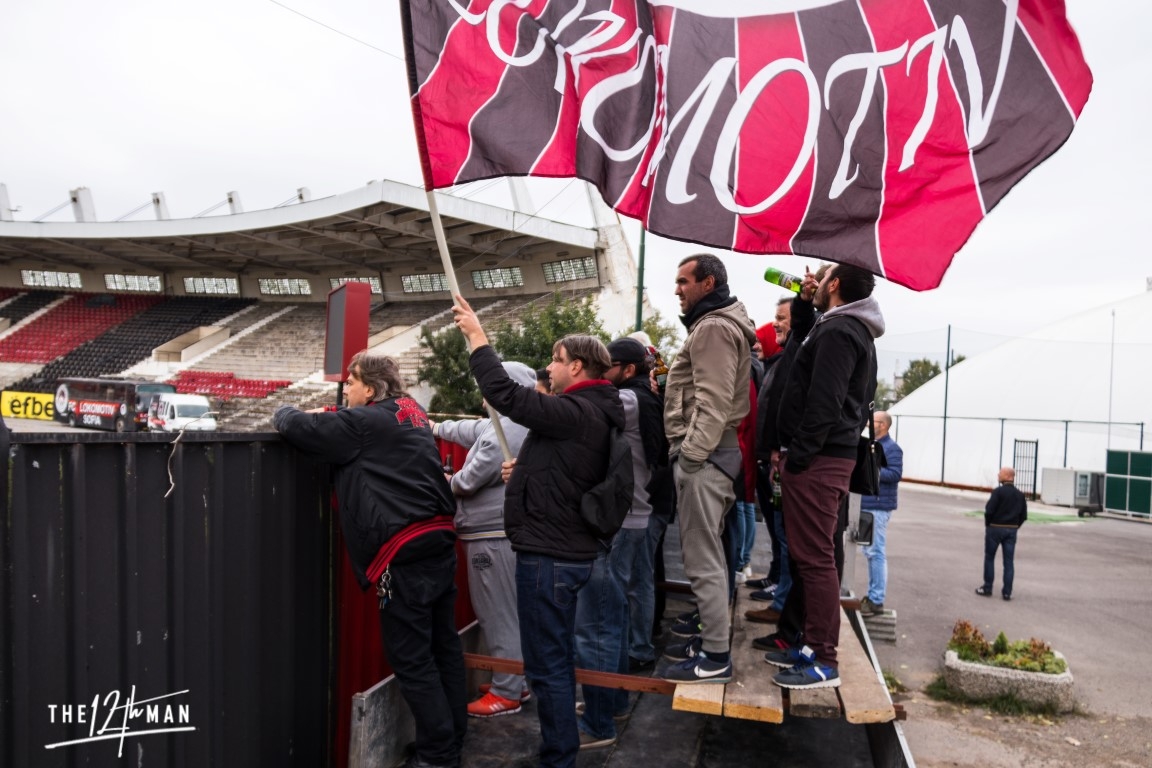 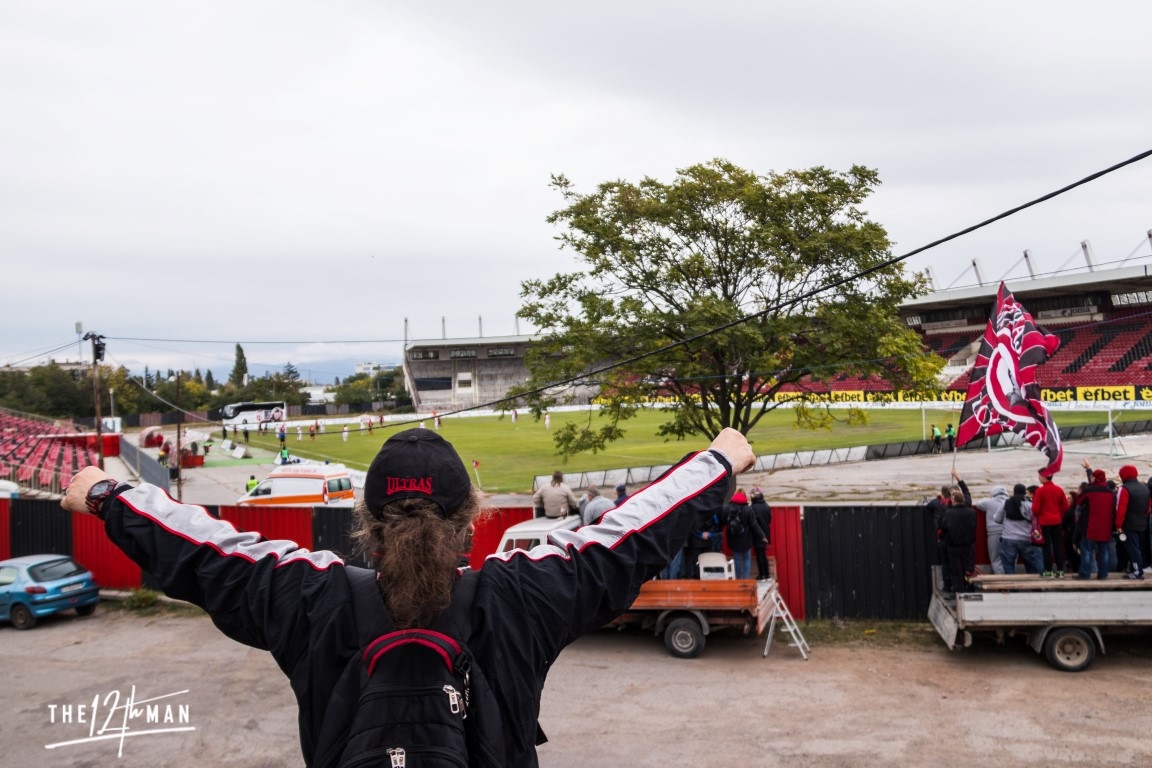 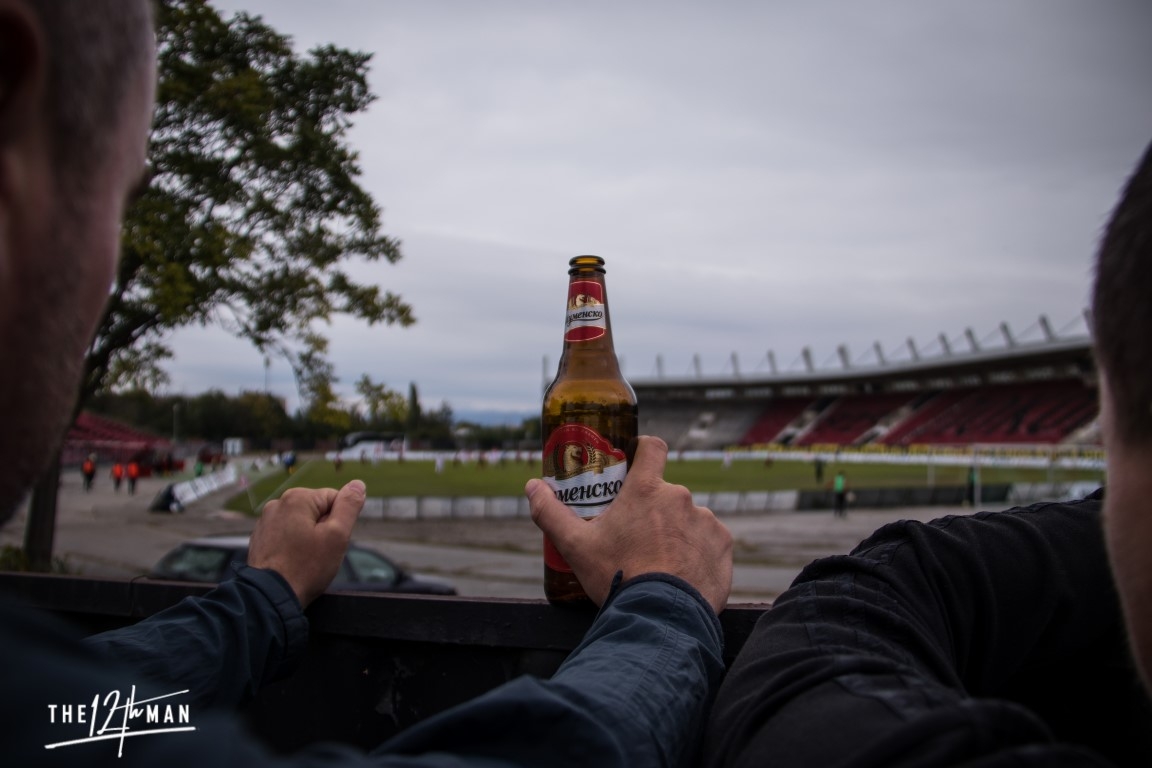 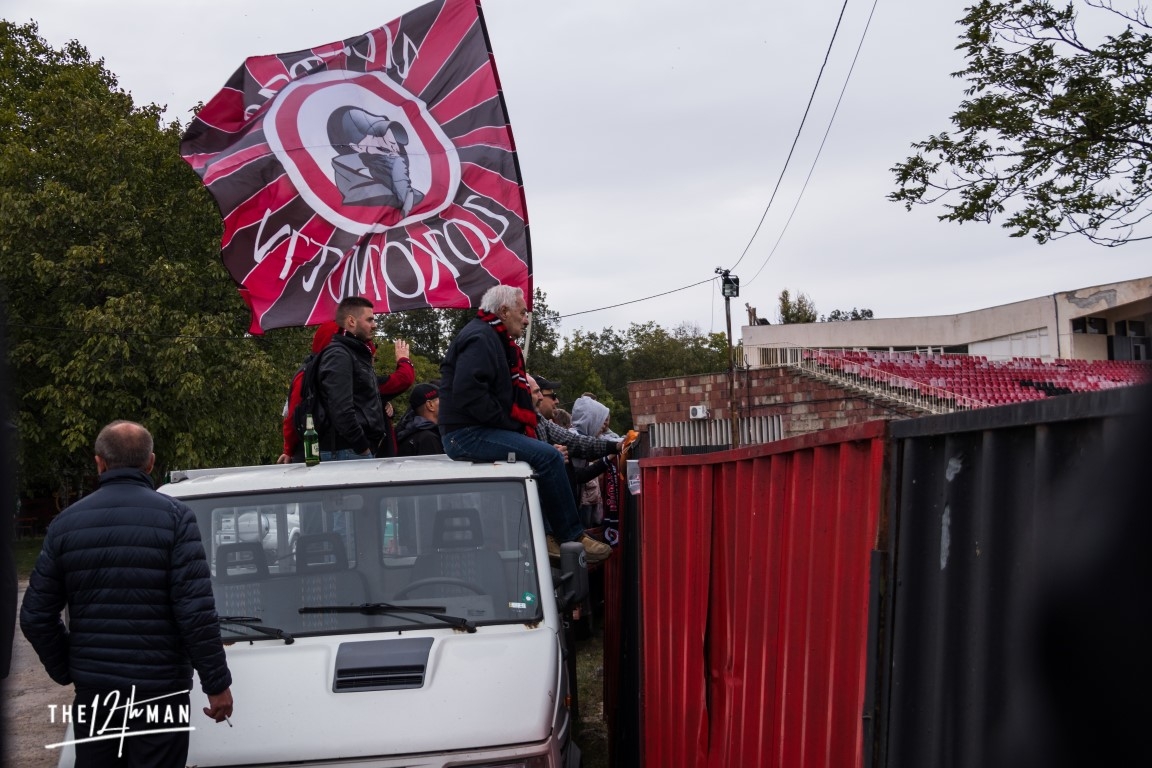